Mastercard Partners Up With R3 to Develop Cross-border Payment System

Bitcoin Tumbles and Takes Altcoins Along for the Ride 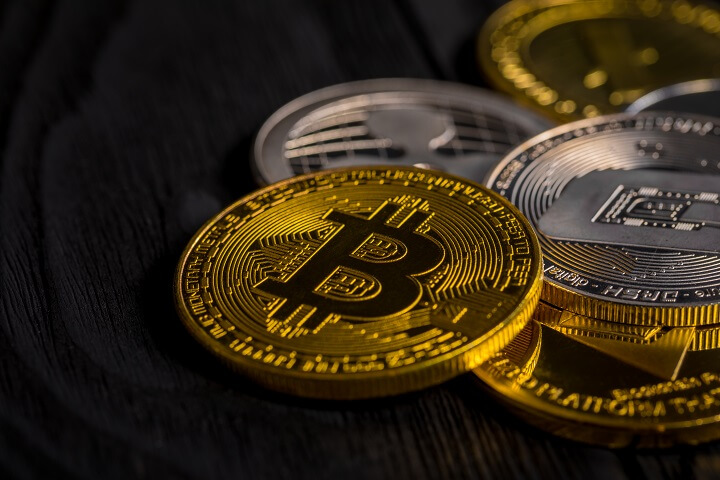 The bears in the market seem to be active with Bitcoin shedding its value and altcoins following suit. Bitcoin tumbled below $8,000 for the second time this week and it lost almost 18% of its value during the last week. On Thursday, September 26 alone, the Bitcoin price witnessed a fall of $200 in the first few minutes. This could likely be seen as the biggest weekly loss of 2019. Prior to that, the second week of January saw 13% knocked off the Bitcoin price.

It is worth looking at the 200-day moving average in order to understand the trend that the Bitcoin price may take in the longer run. The current trend shows some support around the $7,032 mark. If this is breached, we may be looking at a bearish run for digital assets.

The Relative Strength Indicator for Bitcoin remains close to a 50 mark, which makes a futuristic bet rather difficult. 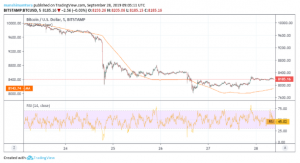 The bloodshed also impacted altcoins. If we look at Ethereum, the second-most famous cryptocurrency, it hovered around the $174 mark, after facing heavy losses during the week. ETH plummeted close to 19% over the course of a week, following the big brother Bitcoin and overall pessimistic market sentiment. Market experts commented that if ETH breaches the $150 level, it may soon reach $120.

Ripple or XRP has been trading close to $0.245 over the past couple of days, and bearish attempts to sink below the yearly low were contained. XRP also slumped approximately 16% during the week with its market capitalization at $12 billion. If it breaks its 52-week low of $0.22, further downside can be anticipated.

Bitcoin SV or BSV continued to portray weakness and the RSI levels also looked pretty oversold at 19. An RSI Index below 30 suggests a possible pullback in price, while that above 70 is an indicator of potential downfall. It currently trades around 84 and RSI levels rebounded too.

Saturday, September 28 saw the cryptocurrencies reviving from their heavy losses of the week. Bitcoin, Ethereum, Ripple and Bitcoin SV are all in the green, scaling 2.1%, 5%, 0.59%, and 1.5% respectively. Though the gains have not been much, there is at least some relief from the downfall. The market sentiment is still skeptical and the market capitalization of all cryptocurrencies together is at $218 billion, down from $266 billion in the last week. The dominance level for Bitcoin remains at 67.7%; not much of a change there. 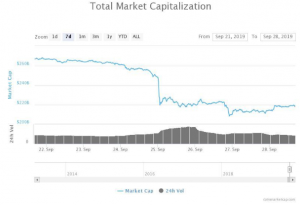 There is much news surrounding Ripple; though it was affected by the selloff as we saw, it maintained a tighter trading range and was quick to bounce back. It’s market dominance is up by almost 1% compared to last week.

Ripple designed xRapid to give companies a way of using XRP for transferring money. Ripple is considering a trillion-dollar deal that its rival Swift is likely leaving.

Ripple would be joining hands with crypto exchanges that can accept fiat from financial institutions and remit XRP to the corresponding exchange overseas, where it can be converted to fiat currency. Ripple is considering xRapid in Brazil and other countries in the Asia-Pacific region.