This week was relatively better for the market as BTC was able to find support at $8,120 and boom away to $8,830. However, the signs of a correction being over have still shown, despite a lot of optimism and larger time frames reflecting similar price action to when $3,200 was hit.

Certain altcoins like ZRX and MATIC saw a great amount of traction, however, they have since faced brutal resistance rejections and are looking like this may have been a corrective move to the upside.

October is set to be an important month for the market, as BTC and the rest reach a “make or break” scenario in terms of price action. With choppy prices and indecisive volume, there is no way to accurately estimate a directional bias. We expect the next few weeks to show us some crucial price action that finally helps us understand broader sentiment levels and how the market will move going forward.

There is no way to time the bottom or understand if this is the top as of yet, but there are important levels that can signify this. Anything below $7,640 will be dangerous, but a final leg down can be confirmed by a daily close below $7,870. On the upside, $9,400-9,500 serves as an important resistance that needs to be beaten in order to sustain this bullish move.

In this market outlook, we will look at BTC a little more closely and relatively ignore altcoins as, at the end of the day, BTC is king and it drives the market. 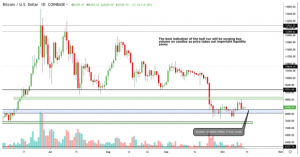 Preset liquidity zones on BTC played out to perfection for both support and resistance. A small intraday swing between the levels means a lot of bulls and bears have re-entered the market once again.

With price swinging up to $8,800, it was almost certain that bears would get in to try and suppress price once again. One inherent advantage of the bears right now is their psychological advantage. A long red candle or a huge wick at the top would go a long way in inducing some panic selling for those who secured some gains from this run-up.

In the coming days, there is expected to be a small period of consolidation before another short term swing arises. Volume will be negligible and it will be purely driven on the strength of bulls vs. bears.

BTC touching the $8,800 support means that we can look at the market a little more negatively again. However, ruling out that the bottom has been set is very naive – even on longer time frames. 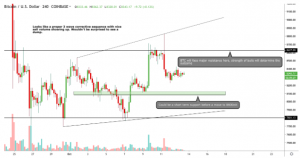 Lower time frames suggest BTC may be done with a corrective three-wave move to the upside. Breaking the green zone would be indicative of some strong bearish sentiment, but if it holds, we expect BTC to test $8,620-8,700 again (in the very least).

The surge in volume on the move up may be enough to convince us of bullish momentum. Based on the pattern from $3,200, which everyone is obsessing over now, the candle that retroactively confirmed the end of the bear market had volume as high as the attempted bullish breakout just before the bottom. This pattern has emerged once again, so it cannot be ruled out.

As we said before, there’s a slight bearish bias at the moment, simply because everyone saying that the price action looks like $3,200 again has got us thinking that the market has a surprise in store for us. 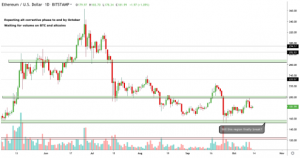 Not looking at much on ETH. Expecting everything to just follow BTC at the moment. $195 resistance rejection and immediate capitulation is not a very healthy sign, but staying above $181 at the moment will be key. A daily close below this level may convince us to hold a stronger bearish bias, until then ETH is still in a bullish pattern.

Many people expect the current bottom to break, irrespective of what happens to BTC. We believe the broader market will replicate BTC at this point, and once volume is back, we can think about contrarian outlooks and plays. 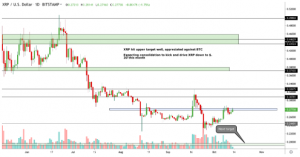 XRP has a low BTC correlation, so this may be an outlier to the market. The current resistance looks quite strong to us, and volume has dropped a lot since smacking straight into this region.

We see $.20 as a near-future probability and see this area as a very strong consolidation zone. Below this, the next support is at around $.14-.15, which doesn’t seem likely to occur again.

We’re expecting XRP to dump with a good amount of volume in the coming week or two. If it does break out of the region with a weekly close, expect to see a $.30-.32 XRP before the bulls have some pressure put back on them.

Focus on BTC; sweet and simple. In time like this, the true primitivity of the crypto market is out on display for the whole world to see. BTC will act as the leader and as it is the only coin with enough liquidity and volume to currently help regain sentiment.

Altcoins can only take off when BTC takes off, so keeping an eye on Bitcoin is the only thing that matters until this correction is done and dusted.