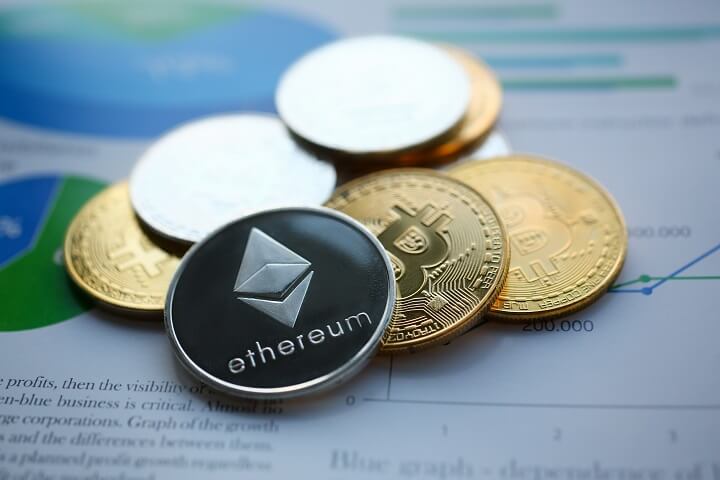 Bitcoin made a much-awaited new low at the low $6,400s. The broader market has followed this trend as BTC continues to be the sole driver of price action in these disparate times. Altcoins are losing steam, even on BTC denominated pairs, so it goes without saying that they are underperforming stablecoins at the moment.

A relief rally is already in the works, and we could possibly see another bounce up, past $7,300, before bears kick the door down again. It is important to understand that as volume and volatility decrease while price action makes lower lows and lower highs, bears are still very much in control. The reversal in control from bear to bull is likely to occur at particular ranges, so keep an eye on liquid key levels that have historically served as reversal zones.

Another few important metrics to watch are coin days destroyed and miner breakeven. First off, miners have the ability to control price on a sustained basis, especially when whales are not in the market. They will hardly allow BTC to dump beyond their breakeven zones, so you can expect a fair amount of support there. They don’t have the ability to pump price as and how they like, but they can limit the impact of moves.

Coin days destroyed helps identify if people are offloading or hoarding BTC. This gives a fairly clear look into the sentiment of the network at large. 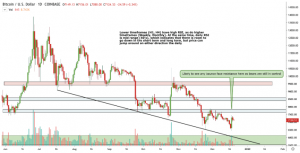 BTC is still in a corrective phase, or what some call a bear market. Sentiment has crashed to a yearly low and more people are starting to believe that the run up to $13,900 was an impulse move, while the market is still in a prolonged bear market. This seems unlikely, but it is possible given the historical volatility of this asset class. It’s time to realize that the BTC market isn’t the same market it was 2 or 5 years ago.

Onto price action, it seems likely that we will get a second look at the $7,300-7,400 range in another leg up. This will serve as a primary bull trap and range shorter are likely to appear at these levels. RSI is painting a fairly descriptive picture. It seems as though short-term and long-term, the Bitcoin price is primed for a move down, but on the mid-range (daily) it will probably go sideways and move up a bit before another leg down.

Market breakdowns take a lot longer than people think, and this correction has served as prime evidence for that. 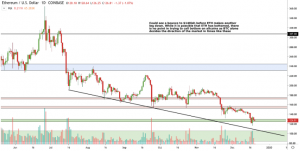 Once again, as I’ve said since the mini uptrend broke, there is no point of calling tops and bottoms on altcoins – even ETH. The best we can do is try to find potentially liquid zones for price action to overlap BTC, where reversals in BTC can spark a trend reversal in the altcoin.

ETH has continued its downtrend and managed to break past the $130ish green zone near CMP. Owing to this, sub $120 ETH is becoming more of a reality, and we may even get a chance to see it below $100. I feel as though these moves are prime for long term accumulation, as the fundamental growth in Ethereum has been far beyond any platform for the calendar year 2019.

The bottom trend line could serve as some form of support for ETH, but it is far too early in this leg to call a bottom or potential reversal zones – even for a relief bounce. 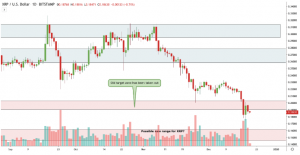 XRP: the retail investor’s favourite coin! My target range near $.19 seems to have broken and been rejected as a resistance too. Quite sad, as I believed this range would hold. XRP is undoubtedly still in its bear market as it never made any new higher high’s to be considered “out” of the bear market.

$.15 XRP is coming closer to being a reality, but once again, it is tough to find a bottom for an asset that has constant supply coming into the market, especially since that supply outweighs demand for the most part.

In any case, I don’t think the bull case for XRP is broken, at least not for the next few years. This boils down retail mindset and the psychology of crypto. Those holding XRP may be pleasantly surprised as to how the next two years will shape up.