Why Anyone Interested in Preserving Wealth Should Purchase BTC

After a bullish start to the year, we are entering another period of uncertainty with the bulls and bears plotting against each other. The long-term structure still looks relatively bullish, but there is much room for some downside.

There were a few fundamental developments in the last few days. Binance entered discussions to enter Japan through a strategic alliance, the United States is planning to make crypto transactions below $200 tax-exempt, and ex-CFTC commissioner Christopher Giancarlo launched a non-profit to promote the idea of a digital dollar.

Apart from this, not much has changed in terms of market structure and volume profile. Everything is looking the same, but bias is now slowly shifting to the bullish side as upward movements look convincing.

We still do have a dwindling volume profile on Bitcoin and other major coins, and this is the primary source of bearish sentiment at the moment. But the first wave up usually has abysmal volume, followed by higher swings up that come with much, much higher volume. 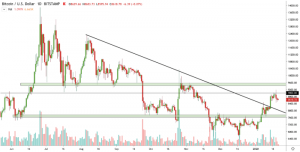 There is an uncanny way in which the Bitcoin price is unfolding at the start and the end of the chart above. Price is reacting almost exactly the same at certain levels, so a dip and some support near the $7,700 mark would be a pattern-fulfilling opportunity.

We believe two weekly closes above the current trendline is the only true confirmation of a reversal here. Volume will come with time, but other signals must show up for a significant bias change to bullish.

At current levels, even a retest of the trend line on the daily chart and a move back higher might be convincing enough to consider this a bullish move. There is room to move to at least $9,600 without much resistance at the moment. It will be interesting to see how the next few days of price action plays out. 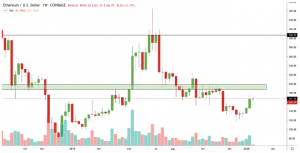 The ETH weekly looks pretty bullish. Volume is picking up, albeit not drastically, but this is to be expected in the initial stages of such a move. Resistance near $200 is the most significant as of now, but there may be enough strength near $185 to force ETH to dip.

If history can be trusted, the next wave of altcoins that rally will start to slowly consolidate and move upwards before suddenly exploding because of some macro news from a regulator or institution.

ETH price action is sufficiently bullish at the moment, and it truly looks ready for a new leg higher. Once again, watching $200 very closely for this. 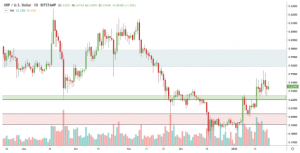 XRP is looking fairly bullish as well now. It might just be time to consider if the bottom really is in. A dip is still likely, but fresh lows may not be on the cards – even for XRP.

The $.28 range is very tight resistance for XRP, but above that, the $.32 region is even stronger with a historically strong volume profile. For a breakout to be taken seriously, we would like to see two consecutive weekly closes above $.28 (or the blue box above the current price).

Demand may just be surging back into the coin, and the next few days to few weeks will confirm or reject this thesis.