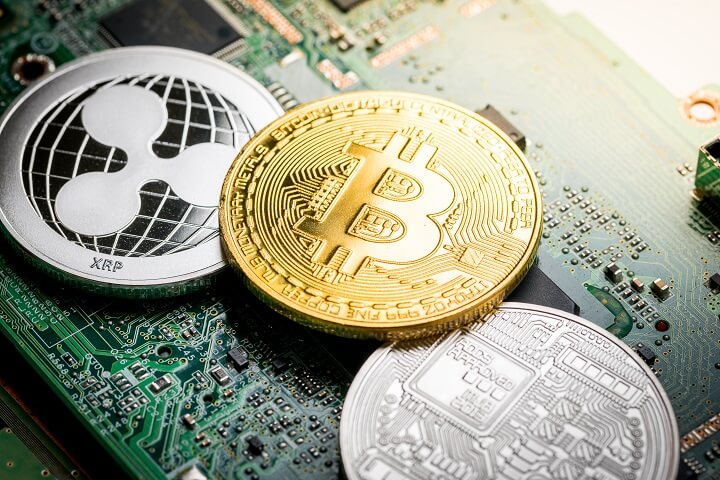 Finally, the market made a decisive move to the downside. Many were caught off guard, but if you were keeping up with market updates here, you would’ve known this was an inevitable move.

The last few weeks, in particular, were incredibly shaky. Bitcoin price was suppressed by low volume and low volatility. This gave altcoins a breath of life in the short term, but now they have retraced along with Bitcoin during October 23’s sudden crash. One interesting aspect is that BTC is still in the red, and most major altcoins are rising. ChainLink (LINK) in particular has been rising exorbitantly, though we estimate it will soon run out of luck and liquidity.

The next few months will prove to be vital as BTC consolidates within a range as investors await for the ‘halving effect’ to come through. On some level, it feels like the halving is being hyped more than usual, so the behavioral impact it brings along may either be already priced in, to a small degree, or it’s effect might be relatively subdued. This is pure speculation given the hype around the event.

Major altcoins like Ethereum will have a reward premium higher than Bitcoin, and we genuinely believe that ETH will outperform BTC over the next year or two. That being said, BTC is still king. It has a relatively lower risk to altcoins and still has a stunning amount of price appreciation – especially when you compare it to real assets and fiat currencies. 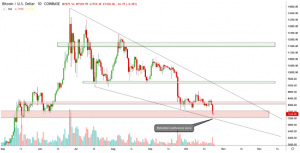 The current trend structure suggests the $7,200 level can serve as a strong confluence zone between high liquidity and the trend. If you look to the last time Bitcoin hit $7,200 (as resistance) at the beginning of the chart, you will see just how much volume showed up, implying a good amount of liquidity.

However, panic selling scenarios are still plausible. We don’t think this will be the case here, and we think the absolute bottom of this move could be $6,800, which is also a very low level by my analysis.

We know that volume precedes price. Looking at the volume structure, there is something inherently bullish about the current price action. Big sell volume comes in and the market moves down. Then, the bottom of the move only comes in the next leg. This means that the volume from the end of September signaled there is one leg left to go, and this is that last leg.

After a long time, we have a directional bias, and it is bullish so long as $7,200 holds. This is important, because of $7,200 gives up, panic selling scenarios are more probable. 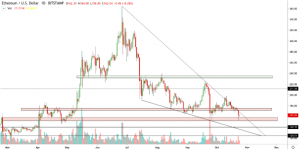 Compared to BTC, we are more uncertain about the direction of price on ETH. There is no real confluence between trend and key levels until $125.

$125 ETH can be a reality if the current range breaks. It looks like a double bottom, and the previous hit of this region had huge sell support. Personally, the “volume precedes price” narrative hits me strong, so we believe a sub $150 ETH is on the cards, even if $125 is a stretch.

ETH’s inability to once again break past the 5-month upper trend line should’ve been a sign of this move, but it’s easy to get caught up in the moment and ignore the bigger picture. Larger timeframes dictate the real trend; smaller timeframes make you factor in noise. 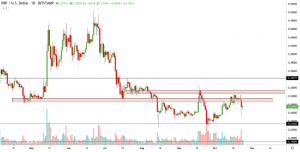 For a few weeks, XRP had been looking sharp. The hype from the upcoming Swell conference was “shilled” as the main reason for the pump. However, XRP is back to its downward wick-ing ways, but it is still 2% up for the day.

In the coming few weeks, we expect a crash to $.19, or $.22 at the very least. The volume before this run makes us think this entire move was just another lower high, prompting XRP to move to around $.19. Other than this, the decrease in XRP sales from Ripple Inc has supplemented demand, which also adds to the relief rally story.

From my analysis of Ripple Inc, we do not believe their reduction in open market XRP sales is sustainable, as it serves as the main source of revenue for the company.