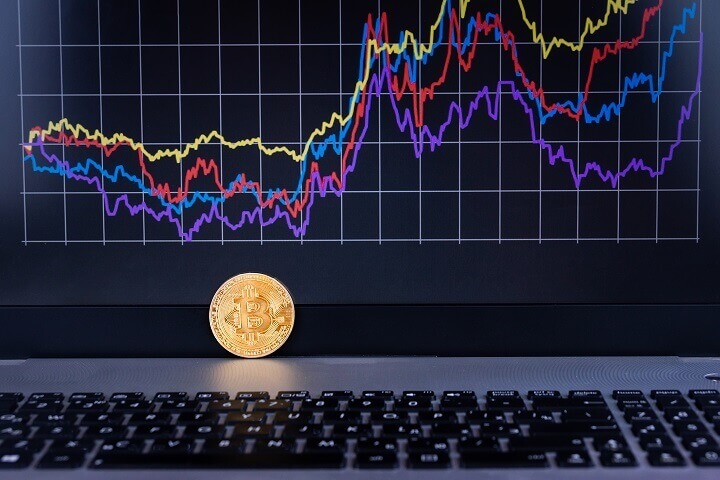 What a week in crypto! Theory after theory was propagated in the hopes of finding the reason for the selloff. Why? Because the prevalent psychology in the cryptocurrency community renders pumps as “natural price action” and dumps as “manipulation. In reality, it is usually the other way around, but that’s a discussion for another time.

Surprisingly, this time there actually was a legitimate reason to believe the dump is being orchestrated by a few parties. There is pretty strong evidence to believe that the PlusToken scammers who amassed 200,000 BTC ($2.9 billion at the time) are slowly unloading their holdings on Huobi. Everyone seems to be able to see this, but Huobi seems to be enjoying the volume and legitimate activity too much to actually stop this.

According to a few rough estimates based on market activity, the PlusToken team is supposedly unwinding about 11,000 BTC a day and will run out of coins to sell in about 2 months.

To make matters worse, Upbit, a Korean exchange, was hacked for 342,000 ETH or $49 million. Upbit has promised users they will use their corporate profits to bear the loss, but the exchange has shut deposits and withdrawals for 2 weeks – and that’s the minimum. While this doesn’t exactly smell like Cryptopia 2.0, it does seem shady. If you continue to compromise your coins by leaving them on centralized exchanges where custody lies with them, you will almost definitely come to regret it one day.

All in all, the sentiment is still bearish and the last few days have been full of negative news and events. 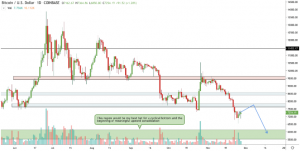 Sticking to our guns on this; we will see a short-lived relief rally that simultaneously serves as a bull trap, and this will lead to a galore of shorts and a new low.

The Bitcoin price rebounded from our $6,840 target, which isn’t mapped on this chart, and we believe a rally to about the $7,700 – 7,800 is on the cards over the next week or so. For once, we are ignoring volume because it has failed us as an indicator over the last few weeks. Instead, we are watching prices carefully for potential short/long opportunities for a small swing trade.

While unlikely, a wave extension of the relief rally to $8,390 – 8,590 is not out of question. This would likely come as a result of renewed strength from bulls, but they are evidently not strong enough to overpower bears at this price level.

To be fair, in choppy markets like this, the best position you can have is to be invested in a stablecoin like DAI in order to preserve wealth while being ready for deployment at any time. Best to sit the next few weeks out if you have a faint heart. 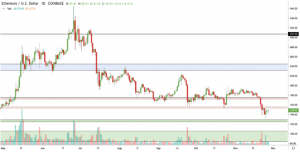 ETH just missed the target we had placed, but we are not looking to actively trade altcoins given the incredible choppiness and uncertainty we are seeing in the market. After the Upbit hack, we will probably see regular action on ETH for a while before the address starts to slowly unload their holdings.

We expect the relief rally for ETH to end near $169 – 171, but these figures aren’t accurate for now. Why? Because Bitcoin is leading the pack for the foreseeable future. All eyes are on BTC, and ultimately the bottom in BTC will lead to the altcoin bottom – even larger ones like ETH.

Keeping a track of ETH would be smart as there are some very ripe levels below to which the cryptocurrency can go to. But once again, ETH could rebound from a region that isn’t a key level simply because of the excessive correlation to BTC. 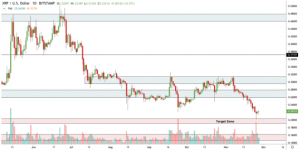 We saw a wick down to the top of the prescribed target zone, but we don’t see this as anything close to the end. We weren’t expecting XRP to drop so hard, so fast, but hey – here we are.

Given the volume on the wicked candle, we think it is fair to say our downside expectations were rational and “optimistic”. XRP is looking primed to drop even below the $.19 level and spike down to even $.15.

This shouldn’t come as a surprise given the incredible selling pressure it has seen over the last 2 years, resulting in an inability for market makers to prop up price for a prolonged period of time.