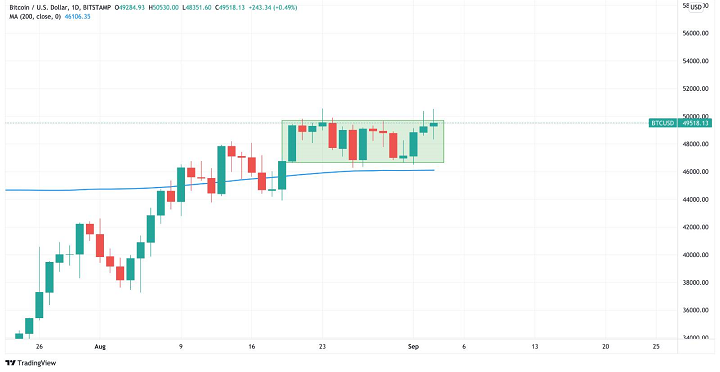 For all of last week, BTC showed resolve to rebound from the mid-$46,000s to touch the $50,000 mark again. The 200DMA is acting as strong support, helping BTC bounce back three times in the last two weeks. At the time of writing, BTC has broken out of a decisive rectangle pattern.

For the last couple of weeks, the $50,000 level has been seen as key. However, now analysts believe flipping $51,000 to support would be key to solidifying the current trend. At the very least, a daily close above $51,000 would be absolutely necessary. During Bitcoin’s run in early 2021, $51,000 was a significant level and it still could be on its way to a new all-time high.

DPLAY – the exclusive $FUN casino – was launched on 24th August and the early response has been massive. The website features a variety of Live Casino Games, Table Games, and Video Slots that make for rewarding experiences. Furthermore, a powerful DPLAY x FreeBitco.in integration makes deposits and withdrawals simpler for FreeBitco.in users.

This has enabled users to place over 23 million bets on the platform in the first 10 days. Further fueling this explosive growth is the $20,000 Vegas Giveaway at DPLAY, a contest where users can win a trip to Vegas. Click here to join the FUN at DPLAY.

ETH Breaks $3,900 for the First Time Since May, Ignites Bullish Altcoin Sentiment 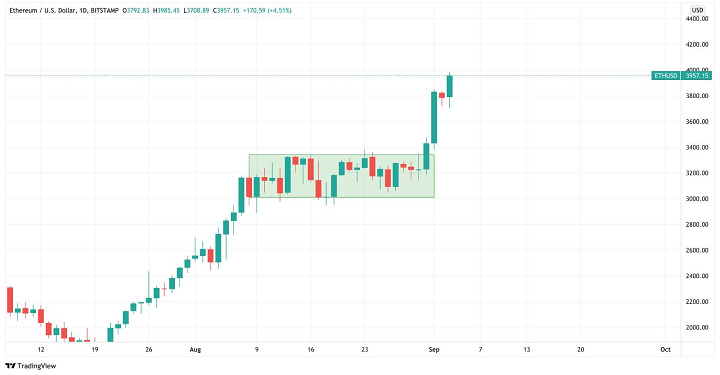 After several days of consolidation, ETH broke out last week, rallying by a massive 23% to cross $3,900. At the time of writing, ETH trades at just $400 below its all-time high. The ETH/BTC pair is also at a three-month high as BTC makes an effort to follow suit.

This is in line with the rising institutional inflow in altcoins in the last month. Coinshares reported over $24 million of inflows in altcoin investment products in the week before last. Out of those inflows, ETH alone accounted for $17.2 million. Investment products involving ETH and other altcoins now represent 32% of the sector’s total assets under management which is just 3% shy of mid-May’s record of 35%.

ADA Crosses $3 for the First Time As Alonzo Debut Approaches 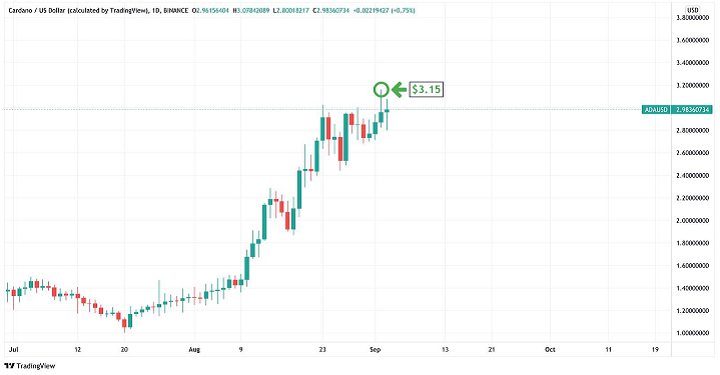 ADA is showing no signs of stopping as it broke $3 for the first time last week. ADA rallied for most of August and has started strong this month, hitting $3.15 on 2nd September.

This rise can be attributed to the hotly anticipated Alonzo upgrade set to go live on 12th September. This upgrade will enable smart contracts functionality on the Cardano network.

Furthermore, a resurgence in the broader altcoin market has helped it push even higher. Cardano-based investment products posted record inflows ($10.1 million) in the week before last, representing 32% of the week’s total altcoin inflows.

Twitter is reportedly developing a functionality that would allow users to add their Bitcoin and Ethereum addresses to their profiles. This is supposed to be a part of the Tip Jar feature at Twitter, introduced in May. This feature allows content creators on the micro-blogging website to accept tips from users.

While this news is still unofficial, the Twitter product lead Kayvon Beykpour seemed to confirm the development when he retweeted screenshots posted by a Twitter user. The feature would allow users to add their BTC and ETH addresses in Settings.

Starting 1st September, Presearch – a decentralized search engine – is set to become a default option on all new and factory-reset Android devices sold in Europe.

Google has been embroiled in a legal battle with the European Commission over accusations that the conglomerate has taken advantage of Android’s popularity to solidify its search engine dominance. Google was fined 4.24 billion euros in 2018. In 2019, Google said it will allow search engine rivals to compete for free on Android devices.

Presearch will now be listed on Android devices alongside several other eligible search engines across Europe.