With more bears active in the market, the Bitcoin price seems to be glued to $8,000 during the last week. Monday witnessed some revival for the Bitcoin price, rising a marginal 1%, however, there was spurt seen in altcoins. Ethereum, Ripple, and Bitcoin Cash rose by 4.2%, 8%, and 5.7% respectively on the same day. 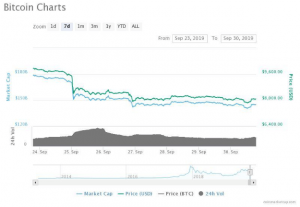 2019 has been a year of hacks, with almost $4.2 billion lost in theft, while 2018 records stood at $1.7 billion. Let us take a quick look at some of the hacks that got a lot of attention in the crypto space.

Binance, one of the world’s largest cryptocurrency exchanges, had Bitcoin worth $40 million stolen in the month of May. The hackers got access to API keys which are unique identifiers, two-factor authentication codes of many accounts, including those of HNI clients. However, no user funds were sacrificed due to the hack as Binance had set up their own insurance fund called SAFU.

A ‘typosquatting’ scam, which involves the creation of a fake online cryptocurrency exchange to gain access to victims’ Bitcoin wallets, took place in June and resulted in the theft of $27 million. After a 14-month long joint investigation, six people were arrested in the UK and Netherlands. This hack impacted about 4000 people spread across 12 countries.

In July, a Japanese cryptocurrency exchange BITpoint lost a total of $28 million. Out of the total amount, $19.3 million belonged to customer accounts, while the rest belonged to the exchange itself. Stolen tokens included Bitcoin, Bitcoin Cash, Ripple, Ether, and Litecoin. The exchange promised reimbursement to the impacted accounts, but no cash refunds.

Another ‘Typosquatting’ scam involved two Isreali brothers, who were allegedly phishing for the last three years. The Gigi brothers, Eli, 31 and Assaf, 21 stole over $100 million in cryptocurrency and had lured investors from websites like Reddit. This scam surfaced in June.

June highlighted a scam that involved Ripple, where hackers made about $10 million in XRP from GateHub users. While investigations are still ongoing, about 500,000 XRP has been recovered so far. Gatehub had detected an increase in the number of API calls coming from a small number of IP addresses during the breach.

June seemed like a month for hacks. On the 27th of the month, a Singapore-based exchange, Bitrue was hacked and about $4.2 million in user assets were stolen. This involved 9.3 million in Ripple and 2.5 million in Cardano. The hackers had targeted a vulnerability in the risk control team’s second review. It gave them access to 90 Bitrue users’ personal funds. However, the exchange announced a 100% refund of user funds.

Adding to the June list of mishaps, Bitcoin crashed on the Kraken trading platform. It initially appeared to be a technical glitch by a whale, however, further investigations showed a clever hack for money laundering.

Though the hacks may not have a lasting effect on the price of cryptocurrencies, it certainly adds to the market sentiment of doubt. The long-term confidence of investors may be shaken off by such repetitive showcases of deceit.