Ukraine to Introduce Cryptocurrency-related Legislation in the Country 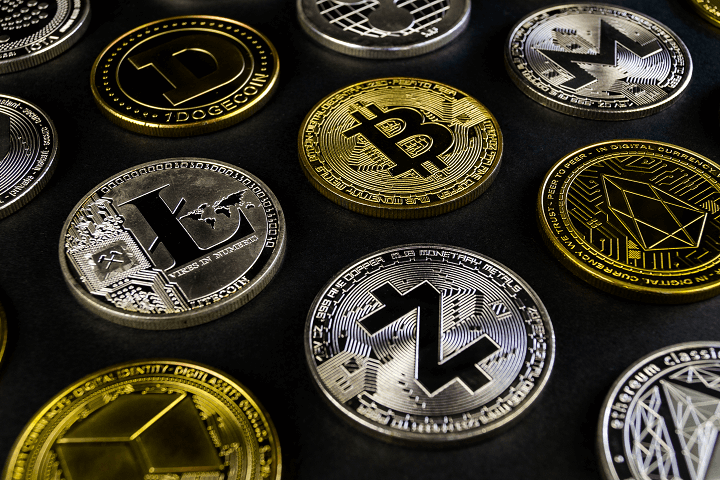 A great weekend immediately turned around into a solid move below $9,000 for Bitcoin. Although the broader crypto market has not followed Bitcoin down, price action across altcoins still looks quite bearish.

Bitcoin having bottomed out is truly the probable case today. However, the volume profile we’re seeing along with the lack of urgency could suggest there is another leg down to go. In any case, the market is making its moves clear for the first time in months, and not to take advantage of the coming opportunities would be a waste.

There hasn’t been much chatter on the derivatives and institutional side, although FTX is slowly becoming one of the giants of the crypto industry. Bakkt’s consumer app was announced last week, and it will begin testing along with Starbucks in Q1 2020.

Considering there hasn’t been much fundamental development in the market, price action is the main focus going forward. Without a strong, crowd-backed narrative on everyone’s minds, the Bitcoin market may be primed to edge into some of that volatility it is renown for. Traders and investors alike must sorely miss volatility given the choppiness in altcoins and Bitcoin.

Without further ado, let’s jump into the charts and what they’re saying! 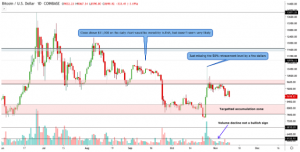 Volume has failed to convince that something big is on the cards as it has fallen to 2018 levels once again. Falling volume is a precursor to a reversal, so we might be seeing a bearish leg once again.

People were shouting about how the Bitcoin price looked like it did at $3,000, and then the market jumped down to $7,200ish. But now, it actually looks like the patch of downward consolidation that occurred before the explosive candle from the low $3,000’s to the mid $4,000’s showed up. Our directional bias is still bullish in the mid-term, however, we may still see a new low.

A wide range of $7,630 – $8,210 is our targeted accumulation zone for BTC, and a break below this could be dangerous for short-term bulls.

If you haven’t noticed yet, breaking lows doesn’t have the same catastrophic effect it used to in 2017 and 2018. We believe investors have built up stronger hands and smarter investors are attempting to game whales who try to incite FOMO. 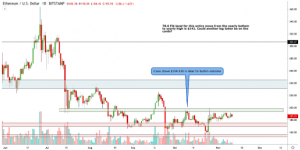 Ethereum fundamentals are absolutely exploding. ETH locked in open finance, or DeFi, protocols has reached a new high in terms of absolute ETH, nearing almost 2.3% of total supply in circulation. This is quite crazy for a 4-year-old system.

Coming to the charts, ETH looks like it may be hitting a ceiling at this point, and we believe there is another low on the cards. $194 – $198 is looking like a strong point of resistance. For this reason, we are using it as the barometer for my directional bias.

Two consecutive daily closes, or a weekly close, above this region would be super bullish in our eyes. However, given the clean rejections even with decent volume, this seems to be an unlikely scenario in the near future. ETH will need to see a major bump in volume if it wants to take out the $198 resistance range.

The current low near $152 looks like quite resilient, having been hit twice in two different moves. And that is precisely why a break of this region could induce real panic selling and FOMO. ETH is the most interesting play for the upcoming week, so we’ll be watching it closely. 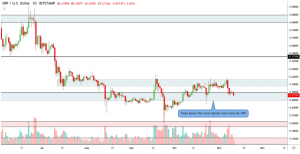 XRP has finally fallen from its short stunt of grace. It is in between two important zones and bulls are facing a real test of their patience and conviction.

We suspect XRP is in for new lows, but it may very well rebound for the mid 20 cent region. In any case, what we’re looking at now is the $.25 region. Two consecutive daily closes or a weekly close below here will leave XRP bulls in the dust as the price continues to fall.

If XRP can bounce and close above $.2778, it will be an incredibly bullish sign, but not a long-term bullish move considering the magnitude of the resistance levels above. Volume profile is quite robust, but it paints a bearish picture given the sheer depth of trading on red days.

Our bias is that XRP will briefly crash past $.20 and make a recovery and consolidation from thereon.

We are on the verge of a trend reversal, and it is by far the most exciting week in the market despite the lack of volatility. This year in crypto has been extremely fruitful and promises a world of opportunity in the coming years.

As we come closer to the end of this correction, we will move back towards the yearly high and witness the coveted block reward halving. Given the economic importance of this event and its historical promise, the market is touted to do its thing and explode by the end of 2020. This is the phase of accumulating and wealth accrual, while next year will capture the wealth creation process.